You are using an out of date browser. It may not display this or other websites correctly.
You should upgrade or use an alternative browser.

.
In the beginning; there were no dress codes and the people thought nothing
of it.

Then came the forbidden fruit incident wherein the people of a sudden felt
different about their appearance in the buff and covered their pelvic ar
as with rudimentary loin cloths.

• Gen 3:7 . . At that moment, their eyes were opened, and they suddenly
felt shame at their nakedness. So they strung fig leaves together around
their hips to cover themselves.

( Apparently Eve remained topless at first; and in some primitive areas even
today, the women still are.)

To my knowledge, God has yet to condemn full frontal nudity; so this
sudden awareness of their appearance didn't come from Him. In other
words; their new attitude about the human body wasn't divine, rather, it was
cultural: and even today, many years later, the world's dress codes remain
cultural.

NOTE: Nudist colonies and clothing optional beaches aren't evil per se where
they are legal. When people condemn those places as sinful and indecent;
they display the effects of the forbidden fruit incident at work in their minds.
_
Reactions: Stan B

Jesus's young cousin John lived rough in the wilderness and didn't bother with any dress code..
Jesus's verdict on him- "John is the greatest man ever to be born of woman" (Matt 11:11) 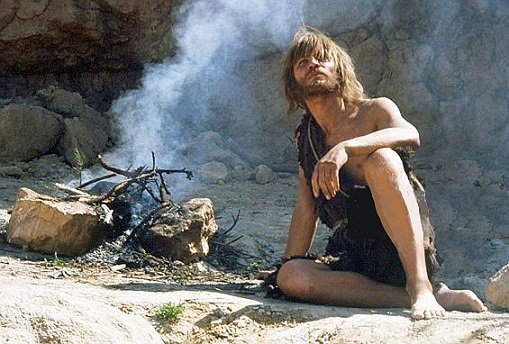 Below: John in action against Herod-

Webers_Home said:
To my knowledge, God has yet to condemn full frontal nudity
Click to expand...

So why did God sacrifice animals to cover the nudity of Adam and Eve? Evidently your "knowledge" about this matter is rather sketchy.

Speaking of dress codes, God very definitely laid out dress codes for his priests. And since His children are regarded by Him as "kings and priests" it follows that Christians do need dress codes and indeed Scripture tells them what is acceptable and what is not. "Love not the world, neither THE THINGS THAT ARE IN THE WORLD".
Reactions: amigo de christo and GRACE ambassador

My parents were obsessed with appearance, for example as a kid whenever I went out my mother would say "Spruce yourself up and comb your hair, it's sticking up on top like a cockatoo".
Even now 60 years later I can't help looking sideways at my reflection in shop windows to see if it's still sticking up..

Our schoolteachers were just as obsessed, Pearson the english teacher used to say "Boys, always keep your shoes polished because as you go through life you'll notice people's eyes going down to your shoes because they're judging your character by how well they're polished"
Reactions: Stan B

Dropship said:
My parents were obsessed with appearance...
Click to expand...

Whether we like it or not appearances are important, and first impressions are formed within seconds of seeing someone. A well-groomed person reflects a disciplined personality, whereas a sloppy appearance reflects a sloppy mind.
Reactions: Wrangler

Enoch111 said:
So why did God sacrifice animals to cover the nudity of Adam and Eve?
Click to expand...

Precisely what species of animal God slaughtered in order to make the
Adams their first suit of real clothing is unknown.

That day, people learned something about the advantages of leather goods.
Most of it is produced from cattle hides: calfskin, goatskin, kidskin,
sheepskin, and lambskin. Other hides and skins used include those of the
horse, pig, kangaroo, deer, crocodile, alligator, seal, walrus, and of late;
python. Humans have used animal skins for a variety of practical purposes
since ancient times, and to this good day leather is still a useful material all
around the world.

The exact cut and design of their garments isn't specified; the Hebrew words
kethoneth (keth-o'-neth) and/or kuttoneth (koot-to'-neth) just indicate a
shirt, or covering; as hanging from the shoulder.

A garment hanging from the shoulder indicates that Eve's topless days were
over; although that wouldn't necessarily rule out the possibility that she may
have become the Gabrielle "Coco" Chanel of her day and created some
interesting necklines.

The garments actually facilitated the people's association with God. They
were unbearably uncomfortable around their maker in the buff, even in the
semi-buff, and that was principally the reason they hid from The Lord when
He came calling. However, fig leaves aren't very durable; they're merely an
expedient. God showed them a much better way-- actually a way they would
never have thought of all by themselves because who would have guessed
that animals could be killed and stripped of their hides for clothing until God
showed them?

The point to note is that the clothing that humanity's maker crafted for the
Adams didn't cost them one red cent nor did they have to contribute even
the slightest bit of labor to its construction. God slaughtered the animals,
treated the hides, and fabricated the garments Himself; and gave the
clothing to them totally free of charge and no strings attached. However, I
wouldn't be a bit surprised if the couple watched how God went about the
whole business so they'd know how to take care of themselves.

NOTE: They'd eventually have to know how to make fire; no doubt God
showed them how to do that too.

I believe God went to all that trouble for a couple of reasons.

First; because He wasn't indifferent to their situation; rather, God felt
compassion for the Adams-- defined as sympathetic awareness of others'
distress together with a desire to alleviate it. And secondly; He didn't want
anything hampering His association with them. In other words, Adam's felt
shame and embarrassment over undress was a barrier between himself and
his maker, so God showed him a really good way to overcome it: a way that
not only improved the quality of Adam's association with God; but also
greatly enhanced his limited survival skills.

To my knowledge, God has yet to condemn full frontal nudity.

Enoch111 said:
Evidently your "knowledge" about this matter is rather sketchy.
Click to expand...

It's none of my business how you conduct yourself in view of the world wide
web, but I highly recommend that you not use inflammatory remarks with
people lest the hapless day arrive when you are forced to eat them.
_

As far as I care about this topic (which isn't very much) there are only two reasons to wear any clothes ever at all:

1) You feel cold.
2) You look better with them, than without them.

God knows exactly what we look like, naked, and doesn't seem to care one jot. So this idea of dress codes for religious reasons is a matter of cultural sensibility, not God ordained discipline.

2 My brothers and sisters, do not hold your faith in our glorious Lord Jesus Christ with an attitude of personal favoritism. 2 For if a man comes into your [a]assembly with a gold ring and is dressed in bright clothes, and a poor man in dirty clothes also comes in, 3 and you [b]pay special attention to the one who is wearing the bright clothes, and say, “You sit here in a good place,” and you say to the poor man, “You stand over there, or sit down by my footstool,” 4 have you not made distinctions among yourselves, and become judges with evil [c]motives?
Reactions: Dropship

Enoch111 said:
Whether we like it or not appearances are important, and first impressions are formed within seconds of seeing someone. A well-groomed person reflects a disciplined personality, whereas a sloppy appearance reflects a sloppy mind.
Click to expand...

I like the 'casual but neat approach' myself, i've never owned a suit and don't want one..

Shining City on a Hill

2ndRateMind said:
As far as I care about this topic (which isn't very much) there are only two reasons to wear any clothes ever at all:

1) You feel cold.
2) You look better with them, than without them.
Click to expand...

Modesty is not only what is commonly thought of but it includes not sexually flaunting yourself.
Reactions: amigo de christo

Modesty is not only what is commonly thought of but it includes not sexually flaunting yourself.
Click to expand...

What’s with the modesty thing? Modesty tends to be culturally defined. Observing the ‘modest’ teenage girls at our church, they definitely dress as BAIT! That the way God designed them, and the way God made men to respond to the bait. It’s an awesome plan!

With regard to Adam and Eve being covered with skins, it was symbolic of the law of atonement which ‘covered’ our sin from God’s view. To ‘cover’ the sins of Adam and Eve, shedding of blood was required to provide that covering.

Shining City on a Hill

Stan B said:
What’s with the modesty thing? Modesty tends to be culturally defined.
Click to expand...

True and modesty explains why people wear clothes today - in addition to protecting one from the environment and looking better.
Reactions: Stan B
You must log in or register to reply here.

A
Women, Source of Life - Source of Death - Teaching

A Biblical Theology on the Book of Ruth

J
And They Were Not Ashamed